The last 24 hours have been a wild ride for Tesla. An upgrade from Goldman yesterday morning gave shares a nice boost, only to later give up those gains in the after hours after Tesla announced a stock offering of over $2 Billion. Today’s trading session would be an important test for bulls and bears. If Tesla had been able to break down below $200 it would have confirmed that Tesla had been in a bear flag the last couple weeks rather than in a potential bottoming phase. Going into todays’ trading session I was aware that the stock had regained all of its losses and was looking to open higher. Soon after the opening bell I bought the 220 calls for $1.10 (when the stock was around 215). Let me show you why this was a bad purchase (looking back on it).

While this trade may work out tomorrow it closed a loss and I will consider it to be a gift if they come back and I am able to close for a gain.

Now I want to go through what I saw on the 1 min chart that alerted me to add to my position in the afternoon. 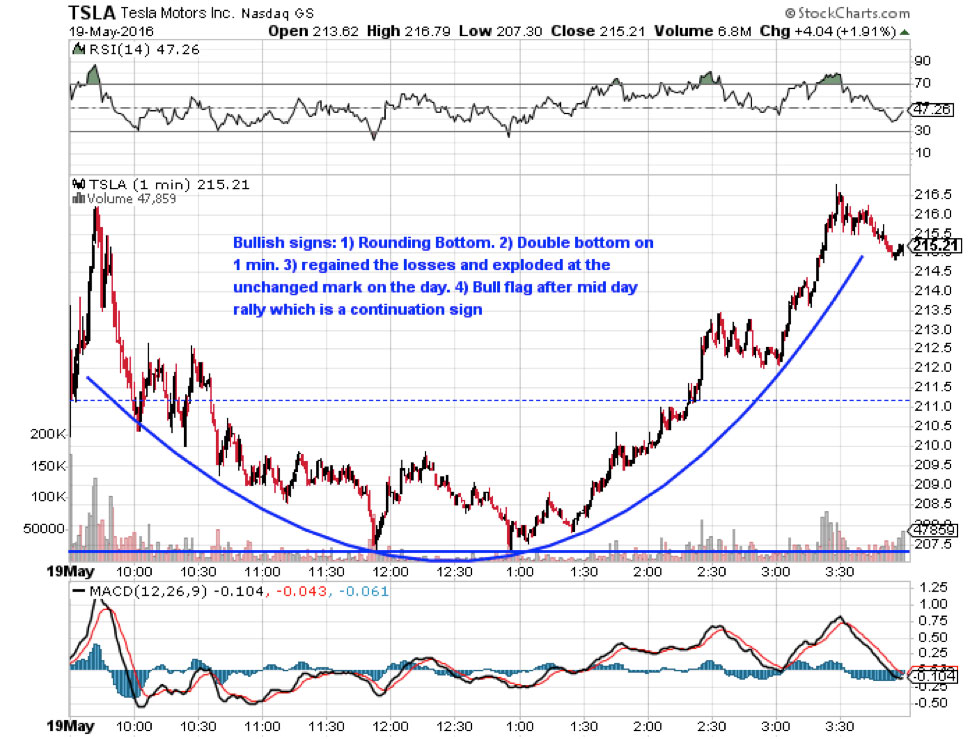 Here are the chart notes: Bullish signs: 1) Rounding bottom. 2) Double bottom on 1 min. 3) regained the losses and exploded at the unchanged mark on the day. 4) Bull flag after mid-day rally which is a continuation sign.

Now I am going to expand on the logic behind the trade and why the risk/reward setup was great. First, the trade: I entered the 217.5 weekly calls for $0.50 at around 2:30pm. I jumped at the opportunity to enter this position, here are the reasons why.

I had a target on the day of $215-$216 (once I had bought this position). Given the constructive price action, a logical point for the stock would be to move up to the next resistance point by end of day. This and the fact that TSLA had a lot of buying power at the break-even mark ($211) told me that the bulls should be in control for the rest of the day. The risk/reward was very attractive as well. I had a mental stop of 50% on the trade. If TSLA had pulled back to $210 that would have told me that this bounce in the afternoon was more seller exhaustion rather than buyers stepping in. If TSLA had pulled back to this level, given that the IV was already depressed, I estimated that my loss would be 50%. Given this, I calculated my risk/reward to be around 2-4:1 when putting on the trade. How did I get this? I projected what the option value would be if Tsla got to my target on the day ($215) and what my stop loss was. The reason my risk/reward ratio is a range is because at the time of the trade I was not sure how much the IV would move, hence the range.