I am bearish on Gold for several fundamental reasons described below. Here is how I plan to play it.

Fundamental Reasons
The number one fundamental reason that I have for being bearish on Gold is that inflation is almost non-existent. Until I start to see inflation over 2%, I think that Gold prices will stay depressed. Why, you ask? For a couple of reasons:

First off, much of the market is driven by fear; until there are inflation fears, I do not see anyone rushing into Gold. This makes any rally in Gold “sellable”. I will concede that most people are bearish on Gold and that when people are overly bearish on a stock/index/commodity, many times the trend reverses.

Second, the gift that keeps on giving is the Fed. It seems that every month, when the FOMC gives their statement, Gold sees a nice 1-2% drop in the subsequent trading sessions. The reason is that if the Fed tapers, people start to fear deflation and that causes Gold to fall even further.

Third, when people fear deflation, they buy the U.S. Dollar and sell commodities, such as Gold. Moreover, whenever there is trouble in the world, people buy the U.S. Dollar now over Gold. Just a few years ago, Gold was considered the safe-haven of the world and now it is the U.S Dollar instead.

Lastly, with economic growth starting to pick up steam, investors may move more money into stocks, and in doing so sell Gold.

Just think about it, the technicals and fundamentals of the broader market seem positive. So, why would someone want to keep investing in an asset such as Gold that is now officially in a bear market? And even more importantly, the fundamental reason for buying Gold, i.e., inflation, is not even there.

How am I Going to Play Gold?

What I am looking at doing is shorting NUGT. This is the 3x-leveraged Bull ETF of the Gold Miners (GDX). Currently, Gold is rallying off of its lows it made in December. As a bear, I love this rally. It is much easier to make a bearish bet when the chart looks overbought than when it looks oversold.

I have illustrated a few charts to show why NUGT is the best way to short Gold. I put together several charts of NUGT and GDX to show you why shorting the 3x-leveraged ETF is smarter. 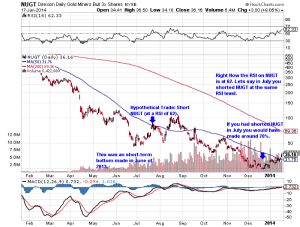 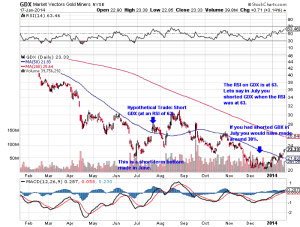