After last night’s earnings report, I am assessing whether or not to buy the 20% pop in TWTR shares. After looking over the numbers, I think TWTR is a buy for a number of reasons. First, they beat on every metric: earnings, users, revenue, etc. Second, the stock is still 40% from its high, and just marginally above its opening day price. Third, when FB had reported monster numbers, it was only the beginning for the stock’s growth. People hated FB before their blowout number, and now love the name, as seen by the 100% return since that report, in just under a year.

With the short interest in TWTR, I believe that this could be just the beginning of a massive short squeeze. However, I think the prudent thing to do is to wait a few days to see how the stock trades. Should the stock show continued strength over the course of the next few days, I would be an immediate buyer. However, if the stock will suffer a pullback, I would probably hold off buying, because that would signal to me that investors are looking at this opportunity to sell and take profits rather than looking towards the future.

Below is a chart of the comparison between the charts for FB and TWTR. As you can see, both stocks were hated before their breakout quarter. But once FB had its breakout quarter, the buying intensified, as people saw that there was a big growth potential. For TWTR, a few analysts today increased their targets to the mid $60s, but many analysts still rate TWTR a “sell” or “hold”. This means that the good news and the growth potential is not close to being baked into the stock. 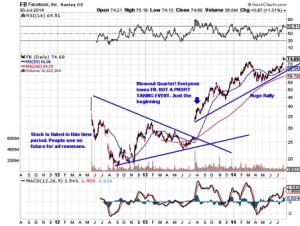 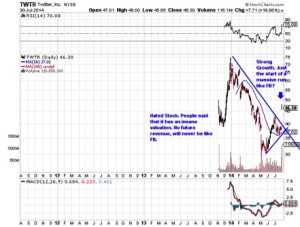 The options activity was quite bullish for TWTR today, after its earnings reporting. There were over $3.5 million in calls bought today, which indicates to me that institutions, overall, were speculating that TWTR would move higher.

If I were to place a bullish bet, by buying the option rather than the stock, I would not risk that much, but would have an enormous potential for the upside. Currently, the January ATM call costs $5.75. I will look to get into the January calls to give myself time in case it corrects. Also, the premium is still expensive on TWTR and shorter dated options will have more decay if the IV were to drop.