Investment Strategies for December and January

This past week was filled with turbulence; the market sold off on Taper fears, Monday through Thursday, but then bounced back on Friday on the heel of a stronger than expected Non-Farm Payrolls report.

This past week I posted on Twitter (@MaxGanik) certain options I got in and why. I bought January $180 SPY calls. Let me explain why I bought those calls. First, I believe that the broader market will have a year-end rally and now that the jobs report is behind us, I think that there will be a market melt-up. The reasons are as follows; first, many hedge funds desperately need to catch up with the market as they are underperforming and will do so by buying stocks. Secondly, December is typically one of the most bullish months and I believe that it will be no different this year. The reason I bought the January calls is because I also believe that the first week of the New Year is going to be bullish and I want to have exposure to that potential rally.

Now on to my second purchase, DXJ calls. I am a bull on Japan for the following reasons: the charts of the Nikkei and DXJ are bullish, the Yen is continuing to weaken, and there does not seem to be an end in sight to the highly accommodative policy. I do plan to buy Leaps (January 2015) calls on DXJ, but I suspect that there will be a small pullback sometime during the first quarter of next year and that will be the time to buy Leaps.

Another way to play a rally in stocks is through the XLF, the financial sector ETF. I am long the January 21 and 22 calls. Over the last few days, there has been a lot of bullish action in the XLF; this is an indication to me that institutions are betting on a year-end rally.

I do not see any correction from now until the end of the year, unless the Fed Tapers at its December meeting. I highly doubt that will happen, but if it does, I would expect a quick 3-5% sell-off in the final couple of weeks of the month. I will most likely take off some of my positions in the SPY, XLF, and DXJ right before the meeting as a precaution. The jobs report was strong this past Friday, but I do not think that the Fed would want to insert any negativity in the market right at the end of the year. 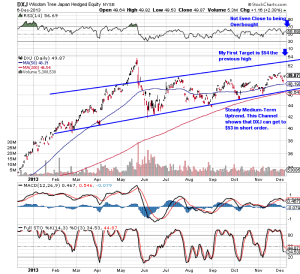