What to do with the Market Here?

Right now, the S&P 500 is sitting at all-time highs. I, for sure, thought that there was going to be a correction sometime in May. The way I am positioning myself is for a rally to start off June. I think that as long as the ECB does not disappoint and the Jobs Report comes in above 200k, that the market will continue higher. The reason is simply that there is no reason for it to go down.

Every reason to go down, as of now, is already known and would not result in a correction. Whether it is slow growth, Ukraine, or bonds, it does not matter. The market did not want to sell-off before and these will not be the reasons why the market sells off going into the summer. The high-flyers saw a strong bounce back and show signs of continuing the climb higher. Many people are still skeptical that the market is going to rally more, which just adds fuel to the fire. Everyone thinks the market is going to sell-off during the summer and they are positioning for it. Usually, when everyone expects one thing, the opposite happens. In turn, what I am doing is buying calls in individual stocks until the market convincingly tells me that there is going to be a sell off (for me this would be a break of the 50-day moving average on the S&P 500).

My favorite stock for a rally is Amazon. The reason is that out of all the high-flyers, Amazon has rallied the least. That may sound counter intuitive, but I think Amazon will break out above the 50-day moving average and continue up to 330 which is its prior resistance. I bought the June 21st 315 call @$6.40 yesterday to reflect that view. I will most likely take some profits at 320 and then see if it can rally up to 330. With the market at all time highs, I do not feel comfortable to be in trades more than a few days. The only reason I bought the June calls is because I think the downside is limited and I do not want the effects of time decay. I would only need a 2% move by expiration to break-even on the calls, the risk-reward is excellent in my opinion. 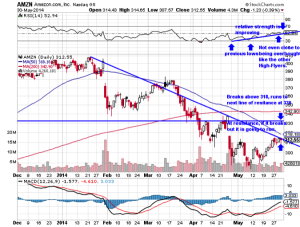